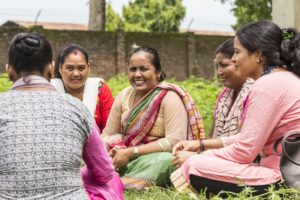 “Life is all about sun and shadow, it all depends on us whether we opt to shine like the sun or fade like a shadow,” says 35-year-old Raju Devi BK who has witnessed several peaks and plains in her life. Being married off just at the age of 15, she could not complete her studies. With no academic qualification and no skills in hand, she was confined to be a homemaker with no earning of her own.

Her life took a major setback when her husband, the only earning member of the family lost his life due to snake bite, leaving Raju and her 4 children in a devastating situation. Raju recalls the news of the demise of her husband was so shocking to her that it took 2 months for her to gain complete consciousness.

The real challenge of her life begins after the demise of her husband. She faced domestic violence from her in-laws. Being a widow, she began to be treated as impure. “Once during a ‘Shraddha’, I was working as everyone else did. But my elder sister-in-law stopped me from doing anything and said it would be impure if I touched or did anything for the Puja. I was so hurt. I just quietly stepped out and did not engage in anything. She still recalls how being verbally and physically abused used to be her regular routine.

However, she gathered herself and started to work as a health assistant in a hospital. “My days of hardships had started then, but I knew I could not give up. For my children and for myself I had to work and earn. I recall my days when I left them alone at night when I had to work during night hours. I would come back tired, yet every time I opened the door and looked at my children it would give me peace,” says Raju.

Besides, she also formed Dalit women’s group prior to being engaged with FEDO, of which she also is a President. 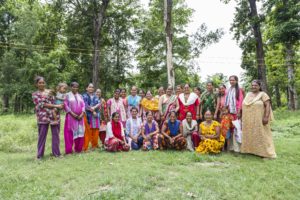 She recalls her first day of training is a very emotional yet empowering one. “I never liked the idea that once a woman is widowed, she should be detached from colours. Colours are beautiful, it signifies life and for us widows, it is like we are not worth living. We are even not allowed to put a Tika- something that is considered a married woman’s ‘dignity’. But that concept is so wrong. I argue that we are put in Tika by our parents at our birth and why do we let being married or a widow- let decide if we are to put Tika or not. I asked with all the women, and they all had this grievance that society discriminates them. Therefore, they all revolted and wore Tika since then.”

Raju, hard a rough start, but today she is a woman of courage who thrives to empower other women. She has become an example to many and especially Dalit women. “Amid choices between shine and fade, I opted for shine,” says Raju with the pride.