No Longer Dependent on Husband 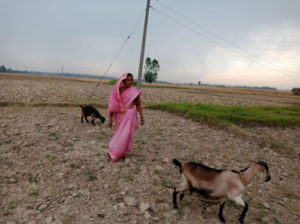 Permanent resident of Badhaiyataal Rural Municipality, Lajjawati Raidas is a mother of three children. With no
education and no skills in hand, she was compelled to rely on her husband’s income to run her family. It was really
hard for her to bring up her three children as the income of only earning member of her family, was not good enough.

She always wanted to do something on her own so as to support his husband financially and bring up her children in
a good manner. To get involved in income generation activities was a far-fetched reality for her until she joined Himal Dalit WomenGroup in Badhaiyataal Rural Municipality ward no 7. No longer than had she joined the group, she began to participate in each and every activity conducted by the group. Within the very short span of time, she became the most active member of the group.

Being involved in the several activities conducted by the group, gave her confidence that she can start up her business. In this connection, she took a loan of Rs 10,000 from the group and bought 2 goats and started goat farming.

Within 14 months, she managed to double the numbers of goats. By selling goats in the local market, she is earning
good enough to provide a better life to her children. Now, she plans to add up the number of goats on her farm
targeting the markets of Kathmandu and other cities. She is confident that her goats will be sold at a very good price
during the festival of Dashain.