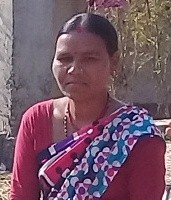 Mina B.K., 37, had always witnessed hardship in her life. She was raised by her family in extreme poverty condition owing to which she was also deprived of formal education.

She continued to suffer economic crisis even after getting married at the age of eighteen. She had to look after medicinal expenses of her unhealthy husband along with the family. Due to extreme poverty, tradition, custom and values, she was bounded within household works and was not able to get out of it.

Fortunately, she came in contact with one of the Dalit women groups formed by FEDO Kailali. She joined the group as a member. There she got opportunities to participate in training and interactions which contributed to raise her confidence level to do something for herself as well as society. She also gave her active contribution when the group was reformed under Combating Discrimination for advancing human rights of Dalit women in Nepal project during March of 2018. With attending various interactions, seminars, training and other programs organised by FEDO, she developed the skill of leadership and also realised the importance of political participation. Eventually, she got elected as a ward member in Bardgoriya RMP-6.

Now, she is making every effort for the socio-economic transformation of the women for her community. She played a vital role in obtaining the local budget total of 5 lakhs for conducting tailoring, embroidery and computer training and awareness in gender violence to community women and Dalit students. She also coordinated for distribution of goats and mushroom cultivation training for income generation through the ward-level program. She did strong lobby in ward no-6 office to released budget for hooding boards which disseminate awareness massage against caste-based discrimination & untouchability in many places of her ward.

She is appreciated for her effort. In fact, she is treated as the real hero of her community. She is now living a life full of dignity for which she thanks FEDO.